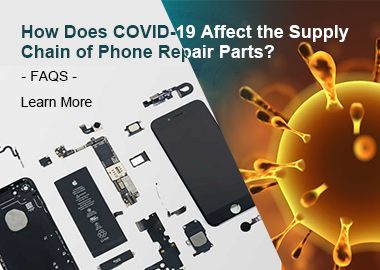 How Does COVID-19 (Coronavirus) Affect the Supply Chain of Phone Repair Parts?

It has been more than a month since COVID-19 occurred in early January and caused widespread concern worldwide. On January 30, the WHO declared the virus outbreak a public health emergency of international concern (PHEIC), which aroused great attention of people around the world.

How does COVID-19 affect the phone repair parts supply chain? Compute Your World will answer the questions of the customers most concerned about in the industry.

How long will the COVID-19 last?

A: It is expected to end in early April.

Under the Chinese government's quarantine measures, the spread of the outbreak has now eased. Zhong Nanshan, the leader of the high-level expert group of   the Chinese Health Commission and the well-known Chinese respiratory expert, said that the COVID-19 cases have declined in some areas, and the peak is expected to occur in mid-to-late February, and may end in early April.

A: The supply volume and delivery speed can be affected.

To prevent COVID-19 from spreading on a large scale, the Chinese government has adopted strong quarantine measures, restricted population flows by sealing cities, villages, and delaying work resumption. Due to the government’s quarantine control, most companies failed to resume production.

For the mobile phone repair parts industry, from the data we surveyed, most suppliers have only a small amount of inventory. It is expected that the supply will be very tight in February, March and April, and it will not be eased until May at the earliest.

A: Keep increasing over a period of time.

Due to the outbreak isolation control measures, the inability of the production, which has caused the risen of the labor cost and raw material prices in the entire industry, as well as insufficient stocks. These three factors have led to the risen of the product prices. Currently, we have received information from many upstream suppliers that raw material increases, so it is expected that the supply will be very tight in February, March and April, and product prices will continue to go up. No matter how the upstream price will rise.